Gas vs. Diesel Engines - Pick the Right Fuel Type for your Business Need

One of the first questions to ask when purchasing a truck is: "gas or diesel?" In most cases, modern gasoline engines suit the average driver’s needs perfectly. Diesel trucks for personal use are rarely necessary unless the individual has specific needs to justify the additional expense. Business owners, on the other hand, sometimes have more than one truck in their fleet, which changes the question from “Should I own a diesel truck?” to “How many diesel trucks should I own for my business?”

Mechanical Differences between Gas and Diesel 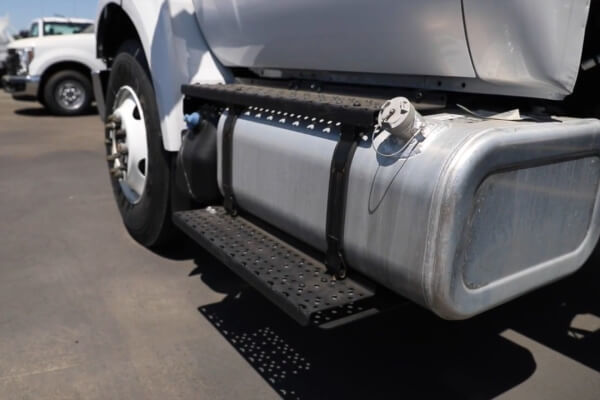 Before getting into the pros and cons of these trucks, here’s a quick breakdown of how the engine works. Traditional 4-stroke gas and diesel engines operate in very similar ways. Both engines have a series of pistons which are enclosed in v-shaped cylinders. These pistons move up and down with four strokes per cycle: down-1, up-2, down-3, up-4. The initial stroke draws in a mixture of oxygen and fuel, which is compressed and ignited in the second stroke. The heat from the second stroke forces the piston back down on the third stroke — the “power stroke” — which is how the engine generates the power to transfer to the transmission. The fourth stroke blows out the exhaust and resets the entire cycle.

In a gasoline engine, the compressed air/fuel mixture is ignited by a spark plug, with the resulting explosion forcing the piston down in the power stroke. A diesel engine, on the other hand, doesn’t need a spark plug. The piston is powerful enough to compress the air/fuel mixture beyond its self-ignition temperature and create the mini-explosion without a spark. This means that the piston can travel further up the cylinder during the compression stroke, which creates more pressure, a larger explosion, and consequently more power in the power stroke. Additionally, diesel fuel engines allow the transfer of this greater power at much lower RPM’s than in gasoline engines. This higher torque allows the truck to tow heavier loads from a dead stop. It also means that the truck can tow loads on uphill roads that a comparable gas engine would quit on.

For a deeper understanding and fantastic presentation, we recommend watching this video from Learn Engineering:

Before 2006, a truck with a diesel engine was the only option if hauling or towing anything regularly. However, because Federal and State EPA regulations are now requiring cleaner-burning gasoline engines, the tables have begun to turn. As of 2014, gas and diesel trucks are much more comparable. Here’s the breakdown of what to consider:

What is the vocation?

More to the point, how heavy are the loads on the truck, and what is the overall volume? Florists will likely not need a diesel truck, and the additional $6,000-$12,000 for a diesel engine would be better spent elsewhere on other business needs. Landscapers may need diesel if they frequently haul loads of dirt and rocks. Commercial electricians hauling thousands of pounds of wire on a daily basis will also benefit from the extra power of a diesel engine. If a job requires any heavy equipment delivery, having at least one diesel truck in a fleet can be a benefit.

How often will the vehicle be driving in hilly environments?

If driving in a city or suburban environment (where the grades never go above 3%), generally speaking, there's not a serious need for a diesel engine. One or two diesel trucks in the fleet would be sufficient to handle any one-off jobs. However, if towing or hauling in mountainous territories is the norm, nearly every truck in the fleet could use a diesel engine.

How long will the truck be in service?

Well-maintained diesel engines can easily see the half-million-mile mark. Gas engines typically fail far sooner. While the individual repair costs on a diesel engine tend to be much higher than that of gas, over a 5-10 year period the picture begins to change. In the first 5 years, there may be more downtime and repairs on a gas engine, and after 5 years, many business owners sell and replace their gas trucks. Diesel trucks within the first 5 years need minimal--if any--repairs, so many business owners save money by keeping their diesel trucks for a longer period. Additionally, diesel trucks have a higher resale value than gasoline, so a business owner can recoup even more money when it is time to replace.

Diesel engines are fun to drive, but it’s important to remember that their value is most realized when used on a daily basis to tow heavy loads in hilly environments. Knowing budget projections over the long-term can help to decide whether to buy gasoline or diesel, and whether to buy a new or used truck.

Published on: September 24, 2019
PREVIOUS ARTICLE
Walk around a 2019 Ford F-550 with a 12-foot Scelzi Welder Body
NEXT ARTICLE
"Under the Hood" - Q&A with a Heavy Equipment Company's Mechanics Truck
Quick Links
Related Articles